Fight or Flight (or Up a Tree)?


We forget the lessons of our youth.

So when I read that Abby Wetherell, the 12 year-old girl unpleasantly surprised then badly hurt by a black bear in northern Michigan "played dead" in staving off further attack, it occurred to me, "What would I have done?"

Thinking it over, I realized with some surprise that laying down and actually playing dead is not something that would have even crossed my mind.  Instead, faced with the choice between fight or flight, the nuance of feigning capitulation (sleep, death) as a means of escape would have escaped me ... leaving my only option to be literal escape from the animal's paws and jaws.

I would've run like hell!  And probably not gotten very far - or gotten myself stuck in a tree, which is a lesson of my youth I do seem to remember, when and if ever being chased by an animal.  First, there is "don't run" (which I guess could be interpreted or translated to "play dead", come to think of it) ... but failing that, the advice I remember is:  run up a tree.  Someone told me that once, I'm pretty sure of it.  But bears climb trees (don't they?), or at least shake them ... 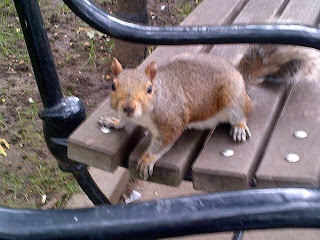 The girl, though, did well, and is doing well (already making the interview rounds).  It could've been me! I scream in silence to myself ... on any one of countless late night walks through the northern Wisconsin small town I grew up in.

Another recent incident to 'shake my tree' involves the late night (early morning) abduction of Alex Band, lead singer of The Calling - a group that has not been on my radar since I snapped off the car radio in disgust about 10 years ago, when that song came on for the zillionth time ... But what made the whole thing particularly jarring to me -- apart from this snark-fail attempt at trivializing the incident:

"Bad news for fans of the early 2000s: it looks like that promise the guy from The Calling made to go  wherever you will go will have to wait for a while, because he's not going much of anywhere for a while."

...Good writing, man!  And I feel your empathy as a "reporter" (and human being).

But apart from that, what gave me pause was that this slice of life also happened in Michigan - this time in the lower ("mitten") part of the state, not too far out of Flint, but in relative darkness, en route to the Canadian border.  In other words, peace of night, middle of nowhere - a climate / environment I know well, and a circumstance with which I'm also familiar:  specifically, a late night walk from hotel to convenience store while on tour or traveling; and in general, walking alone through peace of night and middle of nowhere.

It could've been me! I scream again ... on any number of occasions when, while walking "safely" outside of New York City, it would occur to me that if vans pulled up, bears showed up, axe-wielding creatures leapt out of dark woods ... there'd be no deli to run into, no taxi to hail ...

No one to hear me scream when I'm bleeding.

There's an "element of danger outside of Manhattan" a childhood friend said to me once when visiting from the Midwest - a remark he made in passing while I was conducting a tour of my ex-girlfriends' houses, driving him around through these late night, bridge-shadow neighborhoods in Queens, the Bronx and northern New Jersey ... pointing out to him my own personal landmarks and milestones since leaving the hometown we'd shared.

... That particular night, I guess I kidnapped my friend.  A fellow Wisconsinite, like