When my dad turned 50 years old, he did a little 'river dance' on his birthday cake.  Sadly frustrated with life and years behind him to that point, and whatever present hassles he felt his family, (empty) wallet and failing business had been giving him, in a single swooping motion, he swatted his 50th birthday cake off the kitchen counter, and leapt upon it like Nureyev.

Stamping like a person one-tenth his age in the frosting, and crushing "5" and "0" candles beneath his still shoe-clad feet, he ceased misbehaving only when my mom burst, literally, Lucille Ball-like into tears.

I was not privvy to the "Event of the Half Century", as my brother and I came to call that day; I did not witness it myself ... My brother, in these sort of excited, hushed tones, related what was going on, as I entertained guests in the upstairs bedroom we shared:  a sanctuary (whenever I'd lock Jared out of it) that I used to kick back and call, "The Swamp".

My friend Mike and I had been arguing that day over which of us was going to be Hawkeye Pierce ... and more importantly, which one of us was going to go downstairs and eat birthday cake wearing the dirty bathrobe my brother and I had laying around the floor of our bedroom?

I was adamant:  I was going to be wearing that bathrobe, because Hawkeye would have ... and anyway, it was on my bedroom floor, in my house, not Mike's!

"You're Trapper John!  You're TRAPPER!" I screamed into Mike's sweaty armpit ... as he tightened his headlock and gave me a noogie.

Just then, my brother (Major Winchester) burst in.  "Dad smashed his birthday cake on the floor!"

I didn't hear what he said at first -- flailing, in a headlock, as I was -- but eventually, as the words sank in -- and as my best friend Mike released his grip -- I realized that neither of us would be needing the bathrobe ...

There wasn't any birthday cake to be eaten!

"Jared, are you joking?" I asked my brother.

He responded by throwing me into a headlock ... I told him I believed him!  I just wanted to make sure!

He gave me a noogie.  Then we ran downstairs.

Sure enough, my mom was wailing like Lucy ... a birthday cake was on the floor ... and there was my dad, with some paper towels, wiping frosting and candle wax off his shoes.

Fast forward several decades.  As I near the 'Big Five-Oh' myself -- incidentally, no longer so smug in my lineal place as the older brother -- I compare my (mid)life now, to my dad's back then:  daily stresses?  Check.  Money messes?  Check.  Failed business(es)?  Check(check).  Wailing wife and stunned children?  At times, check and check.

But an overriding impulse to laugh through it all?


That most vital touchstone ... Happily, check ✓. 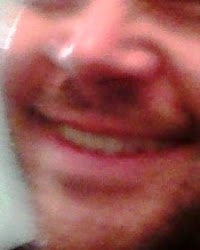